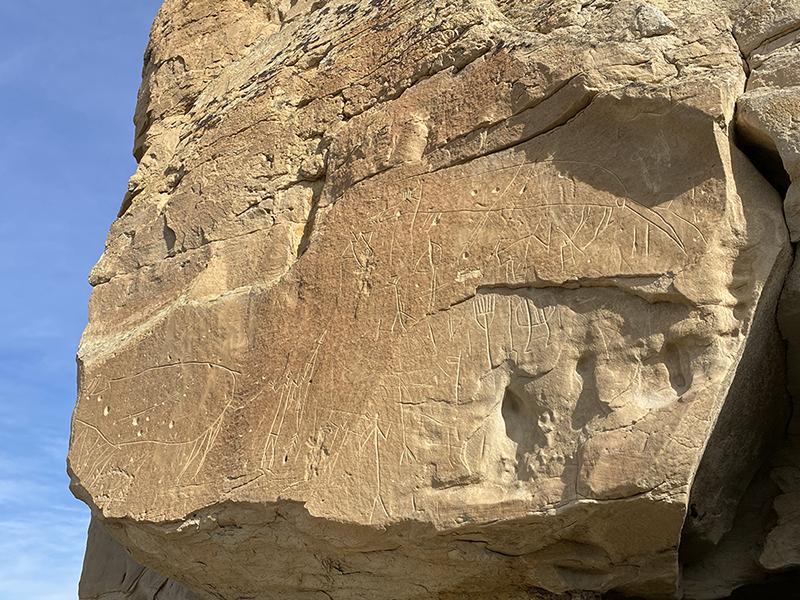 My Trip to Writing-on-Stone by Carlos B.

On National Day for Truth and Reconciliation, I took some time to reflect and learn about the diverse and complex groups that make up the Indigenous peoples of Canada. It was a great opportunity to recognize and honour the legacy of the Residential School System in our country. To deepen our understanding of the Indigenous history in Alberta, my girlfriend and I took a trip to Writing-on-Stone Provincial Park, located near Lethbridge, Alberta.

We were led on a guided hike through the park, on land where it is believed Indigenous peoples lived and passed through as long as 9000 years ago. The Milk River winds through the park, and the area is home to wildlife like prairie rattlesnakes and burrowing owls. It is a very quiet and spiritual place. Our guide told us that it is common to have bad dreams there, as it is a place with millennia of history.

Writing-on-Stone is said to contain the most rock art on the North American Great Plains. On the rocks were petroglyphs and pictographs that were likely created by the Blackfoot, which showed the lives of the peoples who lived there, as well as the spirits they encountered. In fact, many of the holes in the rocks made faces which were believed to be people trapped in the rocks.

Everyone has a story. What’s yours?

We’d love to hear about your favourite memory, story or experience with Trico.

I recently participated in a workshop with about 15 co-workers where we shared 100 stories about Trico. It was so insightful to hear about their unique experiences and perspectives. I walked away feeling so thankful for the opportunity to work with this group and to see their passion and dedication to Trico and our homeowners.

Dreams of Christmas used to be about snow and lights, about carols and candles and the scents of evergreens and cinnamon. But all of these beautiful things fade in comparison to a Trico Christmas! I remember my first one; as a brand new employee I had no idea what to expect of course. I mean, we had a beautiful tree in the reception area and other decorations around the office. Everything was pretty much the same as I had seen in previous companies. But then, one morning, it happened. Big baskets came through the front door and were carefully unpacked. The kitchen table changed within minutes. From an ordinary table, it transformed into this beautiful array of foods; chocolates, cold cuts, fruit, nuts, candy, cookies, cakes, cheeses, chutneys and so on. It was a spectacular sight! An announcement through the intercom was not necessary. More experienced staff knew what was going on and found their way to the kitchen to load their plates and celebrate around the table. As this continued throughout the month of December, I began to understand the deeper meaning of the “Trico ten” and how it had everything to do with the season; the opportunity to gain at least 10 pounds when celebrating a Trico Christmas. Really, what company can beat that?
1 2 3
SEE ALL STORIES
*Please advise that you are a Red Card Rewards Holder upon redemption of this discount. You may be asked to show your Red Card or provide your Red Card Rewards number upon redemption.